Home for the Aged Collection 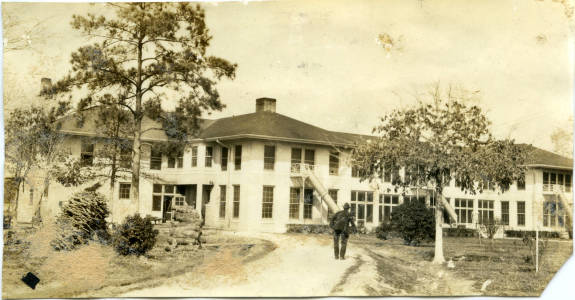 In 1921 Harris County received a judgment in District Court of $80,000 from excess collections of fees by county officers. Led by County Judge Chester Bryan, the Commissioners Court used these funds to purchase approximately 100 acres on the Crosby Road seven miles east of Houston and build facilities for white and African American indigent seniors. Seventy-five eligible residents from the County Home (formerly the Poor Farm, now West University) were transferred to the new facility in March 1922. The name was changed to the Harris County Home for the Aged.

The new home was a vast improvement over the shacks that comprised the housing at the 1893 Poor Farm. The home had facilities for 100 white and African American residents. The Probation Department took over the administration of the home in 1930 due to an abuse of the intake policy by county commissioners and county officials. “As a result, there were chronic alcoholics, persons suffering from mental illnesses, and younger individuals who had resources or could take care of themselves outside the Home" (from the 1939 Annual Probation Report). The population remained near 100 until after World War II, when old age assistance and social security reduced the number of destitute seniors. After almost a decade of the resident population hovering around fifty, the Commissioners Court ordered the home closed in August 1958. The last residents were transferred to private nursing homes by December 1st of that year. The land was divided and sold in 1960.

The Home for the Aged Collection features material created by residents and employees of the Harris County Home for the Aged, which was open from 1922 to 1958. Highlights include a scrapbook created by T. W. Harrel, documents the first decade of the home, photographs taken for the County Annual Reports record the home in 1922 when it first opened and later in 1930, and the papers of Charles B. Green, superintendent of the home from 1937 to 1958.

Additional information concerning the Home for the Aged can be found in the Juvenile Probation Department Records, Auditor’s Annual Reports, and Commissioners Court Minutes.

Browse all items in this collection

C. B. Green Scrapbook and Papers

Includes newspaper clippings about the Home for the Aged collected by C. B. Green, the superintendent from 1937 to 1958.  In addition to photographs of the buildings and residents, there are many portraits of C. B. Green and his family in this collection.

Browse all items in this subcollection
C. B. Green A Link With Tomorrow Resident feeding cats
This is from the quartex-front-end repo.