The Harris County School for Boys was founded in 1910 and originally located in Seabrook, Texas. In 1912, County Judge A. E. Amerman purchased 130 acres of land on Clear Lake, but the school was moved in 1914 to South Houston. In 1923 a new school was built on the site on Clear Lake, adjacent to the county park. The modern facility was completed in 1924 at the cost of $85,000, and the boys again relocated. 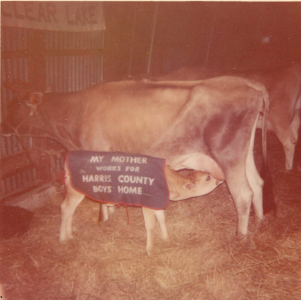 District courts assigned dependent or delinquent boys ages 10 – 18 to the school with an average length of stay of two years. The school's purpose was to “give the wayward boy an opportunity to fit himself for a useful life.” In addition to academic work, the school stressed the trades, agriculture, and recreation.

In 1936 the home was closed.  Although Harris County had a dedicated school for delinquent and dependent girls, a comparable facility did not exist for boys.  In 1955 the original structure on Clear Lake opened as the Harris County Boys Home.  During the 1960s, there was a move to close the school as both the buildings and the curriculum were outmoded. However, after a strong showing of support for the home from the Clear Lake and Webster communities, a co-educational Youth Village was constructed at the back of the property. The valuable land bordering Clear Lake was sold.

There are two photograph collections of the Boys Home that opened in 1955.  A collection of thirty-two black and white 8 x 10 photographs donated to the Harris County Archives by former superintendent John Peters in 2009, and unfortunately are not dated.  The majority were likely taken circa 1970 – 1972 when the Boys Home transitioned to the Youth Village, abandoning the former facilities.

The second collection of snapshots are a sample from The Dandy Lion (1955 – 1962), a scrapbook compiled by one of the house mothers.  The scrapbook is in poor condition.  Although some of the photographs were loose or missing, many were identified, and dates could be assumed.

A third small collection is from C. B. Green, the superintendent of the school from 1913 to 1924. This collection includes correspondence related to his hiring and resignation.

Information concerning the school can be found in the Juvenile Probation and Auditor’s Records and various manuscript collections. Please contact the Harris County Archives for assistance. View all items in this collection.

This is from the quartex-front-end repo.