The Story Behind the Record

The history of the Harris County Archives is a pretty short one- established in 2002- but is not without its share of interesting stories about the origins of some of its collections. In the archives world, we call this provenance. Provenance is information regarding the origins, custody, and ownership of an item or collection.

While we often focus on showcasing records from the archives in exhibits and displays, we seldom focus much on the backstory of how items from the collections were used, where they were found, and how they came into the archives. These are the untold stories of the records in the Harris County Archives; the history behind the documents and artifacts that make up the historical record of Harris County. So in celebration of American Archives Month, we are sharing the inside scoop on some of our records. Join us for a behind-the-scenes look at some of these stories from the archives.

The Story Behind the Record

In 2014 StarTex Title Company contacted the Harris County Archives to assess records held in their downtown headquarters at 617 Caroline Street. The 1920s building was known as Carpenter’s Hall, and housed stores and union offices. In 1936, the building underwent “modernization” to include redecorating, the installation of electric fans, and the addition of modern “conveniences”.

While the building had undergone several more renovations over the years to comply with current codes and building standards, vestiges of the original building were still visible. StarTex planned to vacate the building, which housed many of the company’s historic records, and offered them to local repositories for permanent retention. The Harris County Archives was gifted 32 vol. block books created by Texas Title and Abstract Company, 725 vol. abstracts of title, and 15 order books. Most records date from the mid-1920s, or earlier.

The 1910 Harris County Courthouse was designed and built by the architectural firm, Lang and Witchell. Remodeling projects in the 1950s introduced modern air conditioning, upgraded electrical and plumbing utilities, brought the entrances to street level, and added additional elevators and courtrooms. What remained of the building after these remodels bore little resemblance to the original structure. The skylight and exterior staircases were dismantled, floors were built across the atrium, ceilings were lowered, mosaic tile floors were trenched, and plaster moldings were smashed.

After the new Civil Courthouse was built and the 1910 courthouse emptied of its occupants, work began in 2004 on what would eventually be an eight-year project to restore the courthouse to its previous glory.

During the renovation work, some elections campaign cards were found behind an existing section of marble base near the fourth floor, south side historic staircase (see floorplan for reference).

The Historic Court Records collection (MC043) represents another case of found records. Often these types of records comprise artificial collections, which in archives terminology means- the materials come from different sources (or provenance) and have been assembled and organized by the archives to facilitate its management or use.  This collection of records is artificial in that it was created through a sampling of the case files from the Justice, County, and District courts of Harris County (called Harrisburg County until 1839) from its first three decades, 1837-1867.

Throughout these moves and reorganizations, most case files were lost. The district clerk does have civil cases dating as far back as those in this collection, but they are incomplete and there are virtually no criminal documents.

We will probably never know who put this collection together or why, but we are grateful that these case files have survived to give us insight into Harris County’s distant past. And we are fortunate that in 1980, when the newly-elected County Court at Law Judge, Tom Sullivan, found them in his courtroom, he took personal custody and safeguarded them until October 2010 when he returned them to Harris County for deposit at the Harris County Archives. 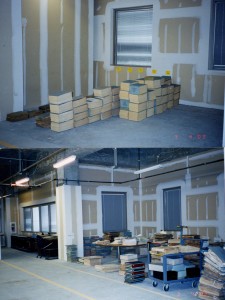 The tax records, which comprise part of the Harris County Archives’, Assessor and Collector of Taxes collection (CR001), are another case of found records. Records that had been previously stored in offices (and the basement) within the department have been transferred to the archives.  All surviving records created prior to 1940 have been accessioned for their artifactual value in addition to their informational value.

1919 tax roll from the records of the Assessor and Collector of Taxes.

Assessor Abstract for Beach Park Addition 1899 and 1900 from the records of the Assessor and Collector of Taxes.

Another component of the Assessor and Collector of Taxes collection (CR001) that narrowly missed the shedder, is the Harris County Building and Land Valuation Cards (BLAs). These records, ca. 1930-1980, provide information about a property for tax valuation purposes and were salvaged when a local history researcher intervened to prevent their destruction.

During the Republic of Texas period, and until the Constitution of 1869, the office of coroner functioned primarily to identify homicides. In 1955 the Texas Legislature passed the Baker Bill, which allowed counties with a population greater than 250,000 to establish an Office of Medical Examiner to assume those duties previously conducted by the Justices of the Peace. Harris County was one of the first Texas counties to opt for this system which mandates the Medical Examiner to determine the cause and manner of death in all cases of accident, homicide, suicide, and undetermined death.

In 1985 Harris County built a new forensic center on the Texas Medical Center campus to provide a permanent, modern home for the Medical Examiner’s Office (MEO) replacing existing inadequate, temporary facilities. In March 2010, the office became the Institute of Forensic Sciences, which incorporated the MEO and the Crime Laboratory.

More recent records are retained by the MEO until which time they are considered inactive and/or archival. This is an organic collection- it continues to grow as records are transferred to the archives.

Justice of the Peace inquest record for Bryant Watson, who died in the 1917 Camp Logan Riot.

When Fern Lyons, wife of long-time County Commissioner E. A. “Squatty” Lyons, donated her husband’s scrapbooks to the Harris County Archives, her son Scotty reminisced that he had put “something” into the time capsule of the 1952 Courthouse during the dedication ceremony.

Work began on the 1952 courthouse to renovate the building for the new Juvenile Justice Center in the Fall of 2003. The location of the capsule was a mystery as there was no traditional cornerstone and a search failed to reveal any other likely location.

In November 2003, Harris County Archivist, Sarah Canby Jackson, found a newspaper photograph in the “Squatty” Lyons Scrapbooks showing former commissioner, Ruth Turrentine, mortaring the time capsule into the courthouse wall to the left of the front door on Preston Street. On January 13, 2004, workers found the time capsule and removed it from the wall. It took several hours to remove the bricks and to chip away the mortar from all six sides of the box.  After being tested for asbestos, the copper box was opened.  All the items were examined and then taken to the Harris County Archives for processing. 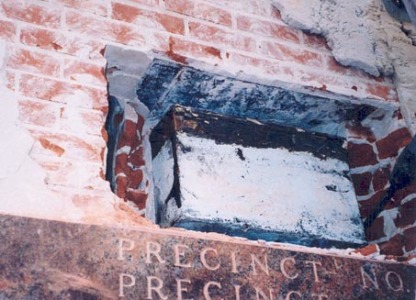 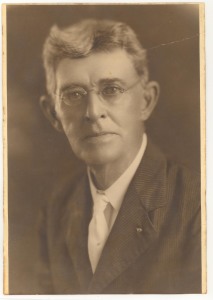