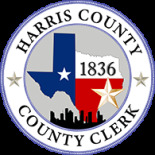 We observe National Voter Registration Day on the fourth Tuesday of September with the goal of focusing attention on the importance of registering and voting in elections. On this day, we encourage all eligible voters to be ready to vote.

The Harris County Archives celebrates this holiday by highlighting records from the collection which show the citizens of Harris County exercising their civic duty.

Register in September, and vote in November!

The 1928 Democratic National Convention was held in Houston, Texas, June 26-28th.  The keynote speaker was Claude G. Bower and the event saw the nomination of Governor Alfred E. Smith of New York for President and Senator Joseph T. Robinson of Arkansas for Vice President.  The convention was the first by either party held in a southern state since the Civil War. Smith was also the first Roman Catholic to be nominated for the U.S. Presidency by a major political party. The Texas Delegation, led by Governor Dan Moody, opposed his anti-prohibitionist stance. Although the Democratic Convention took place in Houston, Smith did not carry Texas in the general election. Due to his “wet” platform, Smith became the first Democrat to lose more than one southern state in the general election since Reconstruction.

Houston would not host another national election convention until 1992 when the Republican National Convention was held in the Astrodome and nominated incumbent President George H. W. Bush.

Since the national convention would take place in Houston in June, there was a need to build a convention facility.  Jesse H. Jones, Director of Finance for the Democratic National Committee, pushed forward the hurried construction of Sam Houston Hall with a 20,000-seat capacity.

Plans for the convention hall were drawn by architect Alfred C. Finn. Located at 801 Bagby Street, the hall was 379 feet long and 318 feet wide.

Poll tax receipt from 1937 with stamps on the reverse side showing that the individual voted, and in which elections they cast their ballot.

A poll tax is essentially a voting fee. The idea of a poll tax originated in the Republic of Texas as a tax levied against all white males between the ages of 21 and 55.  As time went on, this evolved into a legal way to discourage African Americans from voting. Some whites were excused from payment, but there were no exemptions for African Americans.

As the Harris County Tax Assessor, Bettencourt and his staff brought the Tax Office into the twenty-first century by bringing automation to all areas of tax office operations by replacing all of its manual business procedures in property tax collection, automotive and voter registration with a state of the art computer system.