Founded almost a century ago, the Harris County Public Library began in 1921 by providing books and library services to the rural communities and schools of Harris County.    With a first-year budget of just $6,500 budget, a handful of dedicated staff and volunteers brought the thriving system we see today into existence, beginning with a collection of 3,455 titles that circulated a total of 19,574 times in that first year.

Browse all items in the collection.  Or visit the digital exhibit at the HCPL Digital Archive - Origins of Harris County Public Library.

From July through December in 1921, the first year of the library’s existence, the librarians established twenty-six library “stations” throughout the county in schools, businesses, and private homes.  Stations provided a physical location for communities to check out and return books and were visited by the HCPL staff every two weeks. Stations often had a volunteer custodian librarian to oversee borrowing between visits from the County Librarian.  Some library stations only had a few dozen books on a spare shelf, while others had dedicated rooms with space to sit and read.  In addition to the 26 locations, the Central branch at the 1910 County Court House served those in the downtown Houston area. 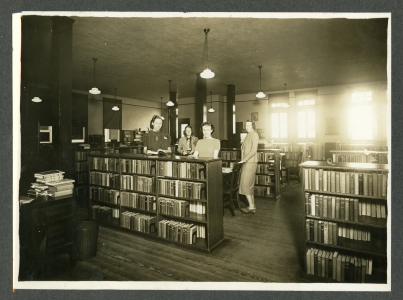 Ross Sterling financed the first permanent library building in Goose Creek (modern-day Baytown) in 1925.  Communities began to build their own small white frame buildings to house their libraries.  La Porte and Fairbanks had dedicated buildings funded by their communities by the end of 1928.

Before the first custom-built bookmobile in 1937, librarians transported books in “book wagons,” basically open cars with the books housed in portable hard, pasteboard boxes.  In 1925 money was found to purchase an Essex Coach, a vehicle with a roof, which greatly improved the comfort of the librarians traveling throughout the county.  By August 1937, a new bookmobile vehicle built by Stewart & Stevenson was in service and was immediately successful.  The new vehicle allowed library workers to bring the volumes to the community on shelves rather than in boxes, making the patrons almost as happy as the staff.

To learn more about the bookmobile program, visit the digital exhibit at the HCPL Digital Archive - Bookmobiles.

Librarians Lucy Fuller (1921 – 1926), Ruth Underwood Pooley (1926 – 1932), and Elnora Edgar (1932 – 1939) established the foundations for the library system.  Through sheer will and perseverance, they created a stable county-wide library system that survived the tremendous funding cuts of the Great Depression. View photographs of HCPL staff.

Browse through a scrapbook put together by early HCPL staff.